Maggie, a rescue dog, at 9 weeks old. Her journey from abandoned and abused to love and health has inspired a book.

SILVERDALE — By the hopeful look in her bright brown eyes, no one could have guessed that at just seven weeks of age, her puppyhood was taken from her.

It would take someone extraordinary to notice the trying spirit of Maggie Anne, showing her will to flourish in the seemingly dog-eat-dog world.

She was a pitiful thing when she was abandoned over several hundred miles from her present-day Bremerton home. At the time of her rescue, her stomach was so insufficiently developed that she could not digest regular dog food. She would run at the sight of any person who attempted to approach her, a post-traumatic response to the abuse inflicted on her by her previous owners.

Rosemary “Mamie” and her husband, Douglas Earl Adkins, of Bremerton were devastated by the passing of their Labrador retriever, Sandy, a member of the family since birth. To fill the void caused by the loss of their four-legged companion, Douglas and Mamie began volunteering at the Kitsap Humane Society — where they found Maggie. At first, it was hard for the couple to cope with the death of Sandy, especially after years of endless love and care. While the Adkinses hadn’t considered bringing another dog home, they saw Maggie and, in her deprived condition, were convinced to let her into their hearts.

It took some time for Maggie to adjust to a nurturing environment. At first, she was cautious and fearful around people; because of the physical and emotional damage inflicted during her young life, she did not know who to trust. During these trying times, the Adkinses worked closely with Kitsap Animal Rescue and Education (KARE) to rehabilitate and steer Maggie toward the right path to behaving and functioning well.

Her stomach’s inadequate development prevented her from eating like the other dogs. Specially prepared recipes had to be made for her. Thus, the conception of “Maggie’s Kitchen Tails.”

“Maggie’s Kitchen Tails,” written by Rosemary Mamie and Douglas Adkins and Martha Char Love, is a collection of recipes specifically for dogs, along with chronicles of Maggie’s heroic journey as a rescue dog. The book also explains what dogs are and aren’t supposed to eat. Since youth, Maggie’s food had to be steamed and dehydrated until she recovered from her rescue. All of the recipes in this book have been tried, tested, and dog-approved. The food is even human-grade.

“Maggie’s Kitchen Tails” will be launched on Oct. 31, Maggie’s second birthday. There will be book signings across Kitsap County; the first one will take place at the Silverdale Library on the evening of Nov. 5. Proceeds from this book will help animal rescues such as KARE, PAWS, and the ASPCA.

The book will also be featured at KARE’s second annual Wine and Wag Gala on Nov. 14. At this benefit event, you can meet the authors and possibly the dog behind the book.

Mamie and Doug Adkins have been activists in the community helping animals.

“Every spirit deserves a happy home with a family of their own, to live free of fear, abuse and hunger, knowing they are loved above all else,” Mamie stated. “The shelters are filled with pets that have no familiar beds of their own, no toys that belong to them and many without even their own names. Please open your hearts and do what you can to help these animals find their happiness in a forever home.”

Since her rescue at seven weeks old, young Maggie Anne has come a long way. A few weeks shy of turning 2, the German shepherd/border collie mix has become the picture of progress. Her coat is healthy, shiny, and soft, and anyone could see in her eyes that because of the Adkinses’ patience and care, she is now truly living — and cradled in love.

Stop by and visit our web site and check out our Maggie as she has inspired a book with a collection of short stories and dog treat recipes.

Emily Hall lives in Bremerton, Wa, attending Olympic College. She is studying education with the hopes of transferring to the University of Massachusetts, slated to graduate in 2019. One day, Emily aspires to be an elementary teacher.

In her spare time, Emily works for the Olympian, where she is a reporter for the college’s newspaper. She also has an internship with the North Kitsap Herald. 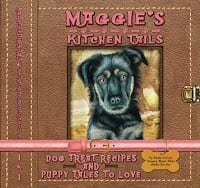